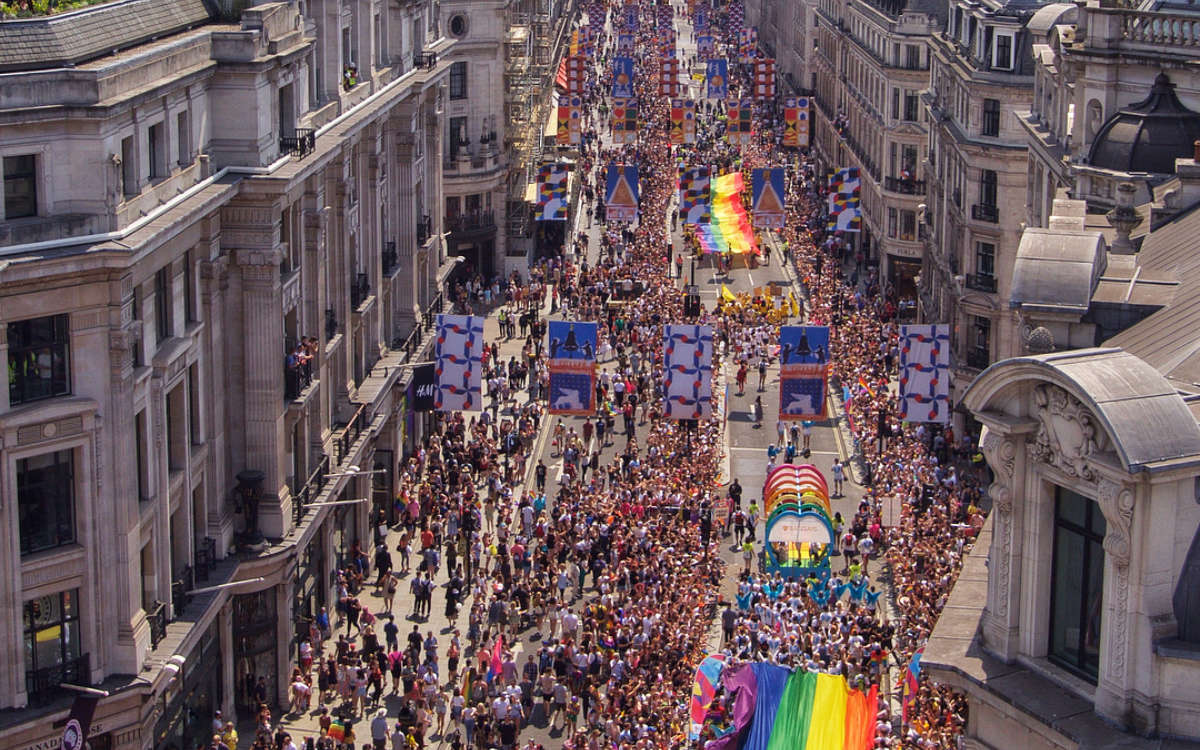 The Pride in London parade may not be taking place across our neighbourhood this year, but many of our St James’s &Regent Street brands will be paying homage in other ways. We’ve created a selection of activity below for you to discover:

- All Saints: partnering with Kaleidoscope Trust on charity t-shirts, donating £10 from each sale of the Proud Sleeveless and Crew T-shirts, the Equality Cori T-Shirt and the Pride Immy Tank.

- Apple: Apple teamed up with Nike and created a special Pride-themed band for the Apple Watch - the Apple Watch Nike Pride Edition Sport Band. The rainbow coloured band can be matched with a rainbow face with the latest iOs update. The bands will help support LGBTQ+ organisations globally in their advocacy and community work, including GLSEN, PFLAG, The Trevor Project, Gender Spectrum, The National Center for Transgender Equality and ILGA World.

- BAFTA: as part of Pride month, BAFTA is hosting a Q&A with the team behind CBBC football drama, Jamie Johnson, to discuss the latest hard-hitting storyline and the importance of visible LGBT role-models in children’s programming and sport. Register here for the zoom event on the 30th June, 6pm.

- Burberry: Burberry's longstanding support for change and the LGBTQ+ community includes the recently dropped “Rainbow” capsule collection, including a T-shirt with the Pride flags rainbow stripes and a reinterpreted Burberry logo.

- Calvin Klein: Calvin Klein’s ProudInMyCalvins initiative - a collection to pay homage to of self-love and identities across the gender spectrum. It encourages unfiltered self-expression and is available in the Regent Street store.

- Coach: Coach will be using their digital platforms to give others a voice this Pride month. In addition, the Coach Foundation has made donations to longstanding partner Hetrick Martin Institute, and new partners GLSEN and AKT Charity who work to create supportive environments for young LGBTQ+ people.

- Cubitts: Cubitts is collaborating with fashion designer and the UK’s first openly HIV+ mayor, ​Philip Normal​, to create a one-off pair of sunglasses to mark the end of Pride month. Continuing throughout July, the one-of-a-kind frame will be auctioned off, with 100% of the proceeds donating to the Albert Kennedy Trust. Philip's design includes a house made up of the transgender flag colours, with a beaming rainbow featuring the inclusive Pride flag colours. Enter the silent auction by sending your highest bid to ​cubitts@playpr.com​.

- Hunter: Hunter is bringing back their Pride PLAY boot with a collection of new footwear, apparel and bags. Hunter will be donating 10% of UK net sales* of Pride products from Hunterboots.com to OutRight Action International’s COVID-19 Global LGBTIQ Emergency Fund, which is created to respond to the urgent needs of LGBTIQ people and communities around the world as a result of the pandemic.

- Levi’s: one hundred per cent of net proceeds from the brand’s Pride 2020 collection go to OutRight Action International, and, in alliance with Self Evident Truths – a photographic project by iO Tillett Wright documenting 10,000 people who identify as anything other than heteronormative.

- Polo Ralph Lauren: Ralph Lauren has launched a ten-piece gender-neutral Polo Pride collection for adults and children, and has partnered with the Stonewall Community Foundation to donate a portion of the purchase price of each item sold in order to benefit LGBTQIA+ organizations around the world.

- Ted Baker: Ted Baker’s digital pop-up - Ted’s Bazaar -is launching its second drop and proudly giving 100 percent of profits to a charity in support of Pride Month. Ted’s Bazaar has a range of unisex T-shirts and mugs, featuring Ted’s ‘Love Has No Label’ slogan for you to enjoy. The aim of ‘Ted’s Bazaar’ is to solely support community-based charities, with donations from the second drop going to Akt, previously Albert Kennedy Trust, to support vulnerable young people in the LGBTQ+ community across the UK.

- UGG: UGG is proud to support the LGBTQ+ community with an all-gender capsule sold all year-round. Their selection of slides features Pride-inspired colourways for you to choose - and in addition - they have donated $125,000 to GLAAD – a nonprofit accelerating acceptance and advancing equality for the LGBTQ+ community.

- Weekday: fans will know Weekday releases a weekly topical T-shirt, and for Pride Month, the Frank Pride T-shirt is a unisex T-shirt that comes in an array of colours inspired by the rainbow flag. Featuring words such as Life, Art, on the front, this statement tee is available in store now.

Whilst you are strolling through our streets, you’ll notice rainbow flags showcasing solidarity from the likes of Christie’s, Swaine Adenay Brigg and more. You can also download a Pride-focused episode from our Regent Street Shaping the Future podcast - listen to Alison Camps, the co-chair of Pride In London talk about the parade and the work that goes on behind the scenes of this incredible event here.

Banner image captured at the 2019 Pride in London parade.

To celebrate Pride, we are creating a digital gallery of memories in partnership with GAY TIMES. We’re inviting you to share your memories and photos to be considered. To enter, please visit GAY TIMES to submit your memories, images and other stories to be considered for inclusion in the gallery. Alternatively, you can email your images directly to memoriesofpride@gaytimes.co.uk 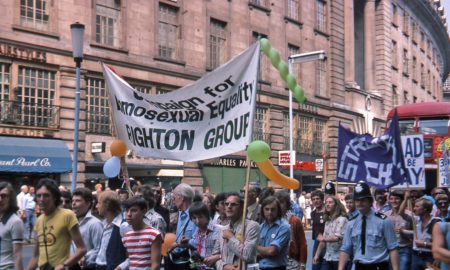