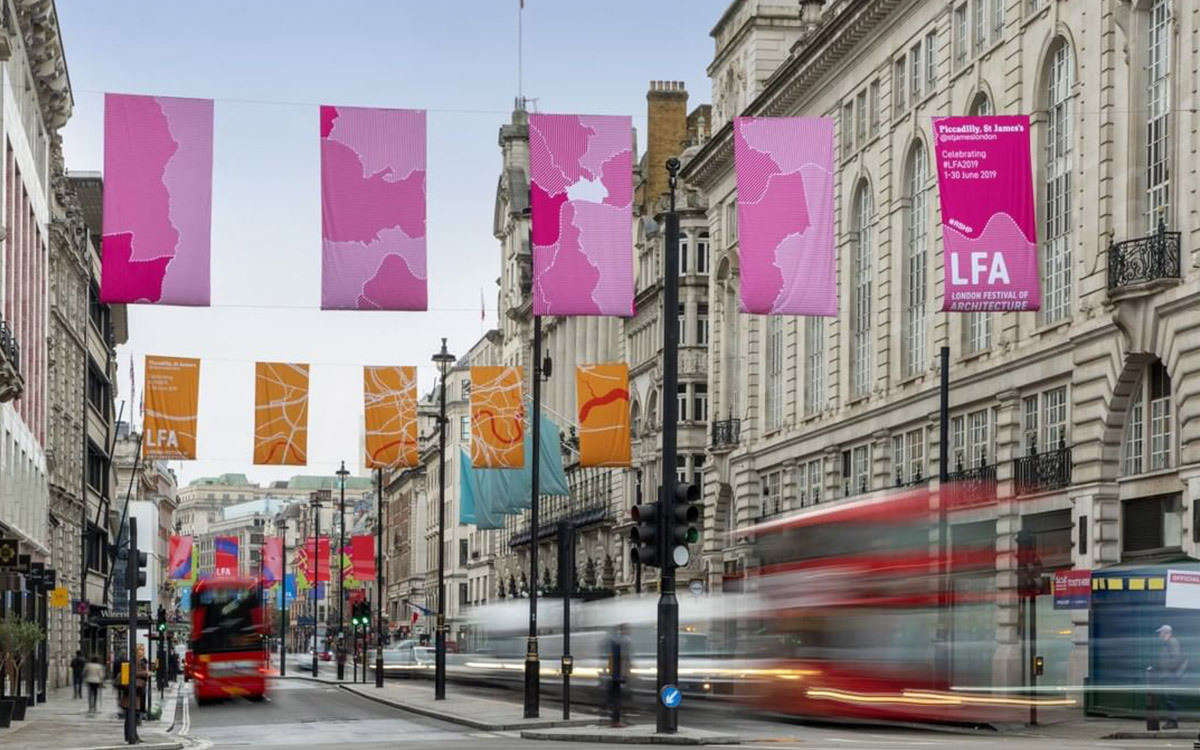 The West End is jam-packed with historic treasures filled with stories waiting to be rediscovered. From the grandeur of Piccadilly, St James's with the best of British art, food and culture all on one beautiful street, to the world-famous Piccadilly Circus lights, explore the heart of London through the lens of architecture.

The London Festival of Architecture (LFA) celebrates London as the global hub for architecture. The annual event established in 2004 has since grown to become the world’s largest architecture festival.

See the full list of happenings in St James’s:

In partnership with international architecture firm, Rogers Stirk Harbour + Partners, Heart of London plays host to a thought-provoking installation down the famous Piccadilly, St James’s - known for its ‘best of British’ brands such as Fortnum & Mason, Hatchards, the Royal Academy of Art and The Ritz London. The bold and unique display explores the boundaries of Greater London and encourages visitors to take the time to explore surrounding physical, political, social and economic boundaries that exist in our modern day lives. There is also an associated exhibit held in the St James’s Piccadilly Church gardens, diving deeper into the stories behind each row of flags and the questions they pose.

Architecture is often seen as something that generates boundaries, rather than helping to breaking them down. Social, cultural and economic inequalities are literally built into our buildings and cities, but instead of delving on these boundaries, academics, journalists and designers are invited to consider how architecture can overcome them and create spaces of inclusion. Join the Royal Academy of Arts for a panel discussion exploring the positive potential in architecture and takes a closer look at how it can overcome, rather than emphasising boundaries of race, gender, or ability.

Tour of Her Majesty’s Theatre with Post-Tour Cocktail

Take a tour of the lavish Her Majesty’s Theatre and enjoy a post-tour cocktail in the bar. If the walls of this historic theatre could talk, they’d doubtless tell some fascinating stories. Renamed, rebuilt and refurbished numerous times since 1705, Her Majesty’s Theatre is still at the beating heart of London’s live performance scene. There is a fitting sense of symmetry that, having started life as an opera house, it still hosts the West End’s second-longest running production: the timeless classic that is Andrew Lloyd Webber’s The Phantom of the Opera. Join Her Majesty’s Theatre for a rare tour of the French Renaissance design and enjoy a delicious cocktail in the sumptuous bar.

LFA Symposium: Thresholds or barriers? Perspectives on boundaries and architecture

This year’s LFA symposium offers a rich exploration of the role and application of boundaries in architecture and placemaking, through two expert panels and a keynote in conversation. Building on a range of case studies, the first panel debates the impact of tangible boundaries on our daily physical experience of the city. A second panel delves into the role of intangible boundaries in our understanding of the built environment and spaces around us, examining everything from role the Dayton Peace Agreement played in Bosnia and Herzegovina’s built environment, to the future of architectural heritage in the age of digital technologies. Sponsored by the Built Environment Trust.

Look up! Hidden gems in the West End

How often do we rush down well-known streets without looking up? This walk will explore the hidden architectural details that we only see if we pause and raise our gaze. Join a walk along some of London’s most famous streets, spotting details you’ve never noticed before. From powerful family crests to secret symbols and stories of one and despair, Look Up London will reveal the fascinating stories hiding above our eyeline.

In the 225 capacity Princess Anne Theatre at the heart of BAFTA’s headquarters, Renato Benedetti will describe the comprehensive expansion and improvements to BAFTA’s Grade II listed building - a five-year journey that has transformed BAFTA’s ability to deliver its wide range of charitable activities to re-affirm its pre-eminent role in British culture. The proposals enhance BAFTA’s international identity as a centre of excellence for motion picture arts, and sensitively balance members’ needs with public access and revenue for cultural, environmental and financial sustainability.

Urban Jungle is a comedy safari, blending stand-up with short documentaries that showcase amazing design, uncover hidden beauty and spotlight the awkward encounters that are part of living, working and playing in London and cities around the world! Nic’s sharp, off-the cuff wit will have you laughing as you explore how we’re shaped by architecture, landscape, and urban design.

Look the other way

EPR Architects believe that our commitment to help shape a better society goes beyond just good design. We feel a responsibility for how the built environment is lived in; ensuring people are included, protected and supported. To that end, in 2018 LFA teamed up with The Passage; a homelessness charity in Victoria which provides resources to encourage, inspire and challenge homeless people to transform their lives. The aim is to change the perception of homelessness and breakdown the tacit boundaries that reside within our society.

‘Look the other way’ is truly immersive 5 minute virtual reality experience directed by artist Simon Waller, where users are asked to 'swap places’ with a homeless person on the streets of London. It aims to investigate how people respond emotionally when faced with the realities of rough sleeping and explore the boundaries that often leave these individuals feeling isolated from the world around them.

The experience will push you to explore first-hand what it’s like to sleep rough, be desperate for help and to face dangerous situations on a day to day basis; ultimately challenging users to consider ways in which they can make a difference.

As part of this year’s Big Architecture Family Day at the RA, we will invite practices to explore the boundaries between historic and contemporary architecture in our urban realm. Watch three of the UK’s leading architectural practices battle it out to create the most innovative and imaginative project that explores the boundaries between old and new. We invite the practices to consider a bit of known heritage and propose new structures that avoid clear delimitation within the urban realm. Join us and see how architects consider their surrounding built environment and forge a new relationship between historic and contemporary architecture, all in LEGO form.

Raze it to the ground or build around?

Inspired by the spirit and conviction of the late Will Alsop RA, we bring together practitioners, writers and critics to make conclusive arguments on the prime conditions for architectural creativity. Led by architect, educator and writer Sam Jacob, the panel will explore if architecture should clearly distinguish between heritage and contemporary, or whether the two can co-exist without apparent delimitation. According to Will Alsop, every building contains references, memories and meaning for many people, and should therefore be loved, reworked and kept. Join us and see competing sides make their case in short dynamic presentations, only to then take on the opposing parties in lively architectural debate.