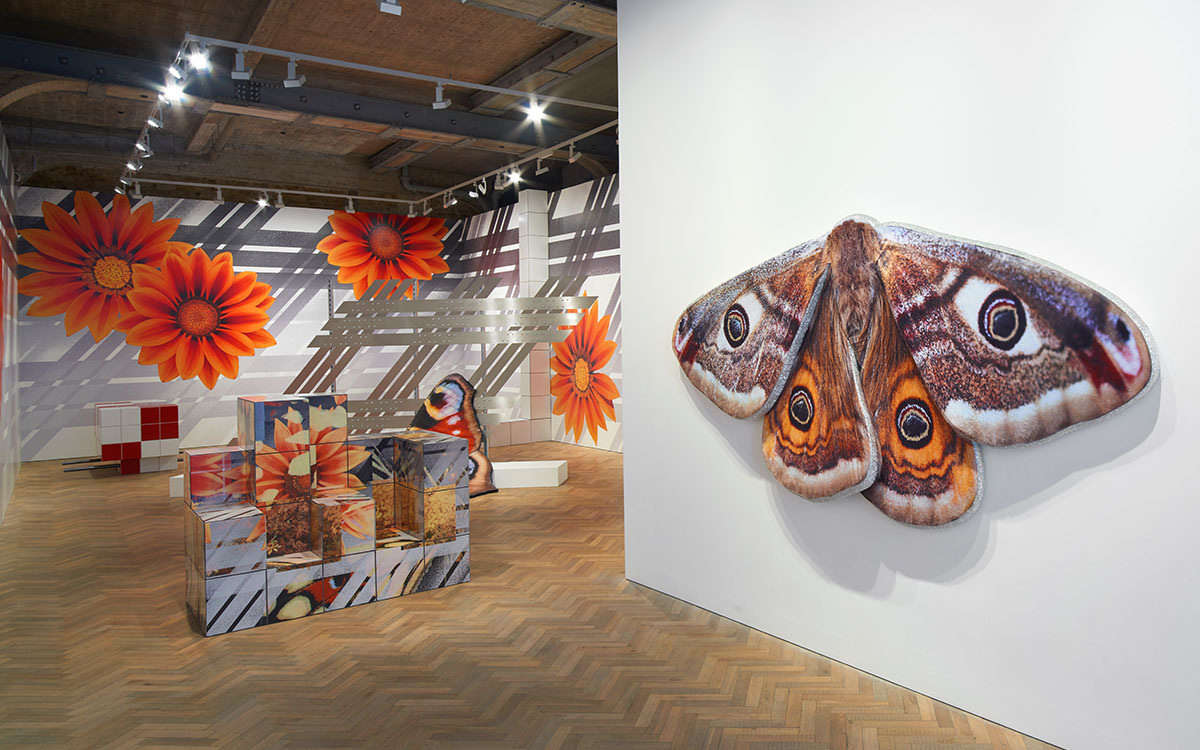 The arrangement of objects, sculpture, and images into immersive installation has become a constant for Anthea Hamilton, whose work frequently mines heterogeneous image sources. This includes The Prude, her first exhibition at both London locations of Thomas Dane Gallery.

For the prude, modesty becomes extreme. The prude will not permit themselves, or others, sensuous enjoyment in life. Hamilton's interest in the literary figure of "the prude" in part, references Cecil Vyse — the aloof character of E.M Forster's A Room with a View (1908). Perceiving himself a sensitive intellectual, Vyse in reality, remains detached from lived experience. This obstinate self-awareness is matched by a cultivated, exaggerated style. This skewed mode of being, the prude-as-persona, serves a framework for the exhibition, where the prude is put to use as a proxy for Hamilton, who performs a "hands off" physicality.

The balance of materiality and economy is consistent with Hamilton's practice, where tactile surfaces are often conceived through digital production. Suggestive of previous exhibitions and series, The Prude is largely a continuation of Hamilton's The New Life at Secession, Vienna (2018). Four distinct interiors emphasise the confluence of domestic and gallery space through a number of wall treatments: airbrushed, textile clad and digitally printed wallpapers. One monochrome room at No.11 includes photographs by Lewis Ronald. Taken at Kettle’s Yard, the images show multidisciplinary artist Carlos Maria Romero interact with objects in the house, specifically, four brass rings and one jade ring (pre-1966) made by Richard Pousette-Dart.

The Prude also challenges relationships of scale and content, with large soft sculptures of moths and butterflies, and extravagant stone, marble, and walnut wavy boots. The effect is less an analysis of artifice, more a consideration of the way objects and images may influence meaning when treated to different processes of realisation.

Though Hamilton's use of material may appear mercurial, her approach to form remains acute. Hamilton's interest in the reducibility and expansion of spaces — in meaning, and as objects — harmonises visual material to a level plane. Here, bodies of research co-exist in a manner that questions the remit of research itself. The recurrence of familiar forms composes this reflexivity: both the work and Hamilton's original interests are situated under renewed scrutiny. Here, the works behave twofold: they are objects as receivers of ideas, while appearing to emit ideas themselves.

Hamilton's work holds an internal logic based on the cultural connections of things: the implicit subtext of an idea, the lineage and physical sensibilities of images, or the curiosity and adaptability of an object's ontology. Tracing the shifting usages and sensitivities of an image, Hamilton brings the frequencies of authenticity and artifice into plain relief — their competing status collapsing. Multiple images or materials may extrapolate from one nucleus: a moth species, an Ed Ruscha gradient, a Robert Crumb figure, a Hamilton tartan swatch. The fundamental economy of Hamilton's choice however, allows the obvious to be both simple and complex; the permutations are high, though the "origin" is concentrated and transformational.